The International Court of Justice, in a unanimous decision, has applied "provisional measures" in the case of Gambia v Myanmar.


Application of the Convention on the Prevention and Punishment of the Crime of Genocide (The Gambia v. Myanmar) - The Court indicates provisional measures in order to preserve certain rights claimed by The Gambia for the protection of the Rohingya in Myanmar


Request for the indication of provisional measures

Application of the Convention on the Prevention and Punishment of the Crime of Genocide (The Gambia v. Myanmar)

The Guardian 25 January 2020 - Francies Wade - The persecuted Rohingya now have legal protection, but will it amount to anything?


The International Court of Justice (ICJ):

The ICJ exists by virtue of Chapter XIV of the United Nations Charter.

Article 92 of the Charter states - "The International Court of Justice shall be the principal judicial organ of the United Nations. It shall function in accordance with the annexed Statute, which ..... forms an integral part of the present Charter.  The Statute sets out the Organization of the Court (Chapter I), the Competence of the Court (Chapter II), Procedure (Chapter III), Advisory Opinions (Chapter IV) and, finally, Chapter V sets down the process for amending the Statute.

Read more
Posted by ObiterJ at Thursday, December 12, 2019 No comments:

On 12 May 1992, Radovan Karadžić was elected as the President of the Presidency of the Serbian Republic of Bosnia and Herzegovina.

He was sentenced by an ICTY Trial Chamber to 40 years' imprisonment on 24 March 2016.

Read more
Posted by ObiterJ at Thursday, March 21, 2019 No comments:

The International Court of Justice has handed down an Advisory Opinion concerning the Chagos Islands - where the important military base Diego Garcia is located.  The ICJ found that the process of decolonialisation of Mauritius was not lawfully completed when the country acceded to independence and that the UK is under an obligation to bring to an end its administrattion of the Chagos Archipelago as rapidly as possible.

Read more
Posted by ObiterJ at Tuesday, February 26, 2019 No comments: 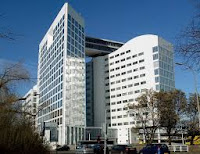 See the Open University presentations on the International Criminal Court.

The Offices - Inside the International Criminal Court (2/5)

The Barristers - Inside the International Criminal Court (3/5)

BBC 3 October 2018 - Why is the International Criminal Court under attack?

Monash University 30 November 2017 - Does the International Criminal Court have an impossible mission?

Thomas Lubanga was the first individual to be convicted by the ICC.  Thomas Lubanga was found guilty in March 2012  of abducting boys and girls under the age of 15 and forcing them to fight in the Democratic Republic of the Congo's eastern Ituri region in 2002-2003.

Posted by ObiterJ at Tuesday, February 12, 2019 No comments:

A note on the Chemical Weapons Convention 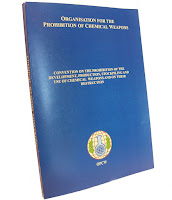 On 4th March 2018, a "nerve agent" - referred to as "Novichok" (newcomer) - was used in Salisbury, England - CBS News 13th March 2018.  The UK Prime Minister - Mrs Theresa May - stated that it was "highly likely" that Russia was responsible for this - see her Statement of Monday 12th March to Parliament.

In this post of 23rd August 2013, chemical weaponry was discussed in connection with the conflict in Syria.

The Chemical Weapons Convention lies at the heart of the position in international law regarding chemical weaponry.

Read more
Posted by ObiterJ at Wednesday, March 14, 2018 No comments:

The International Criminal Tribunal for the former Yugoslavia has delivered its final judgment prior to the Tribunal closing on 31st December.

On 29th November, the Appeals Chamber pronounced its judgement in Prosecutor v. Jadranko Prlić et al., in what was the Tribunal’s most voluminous appeal as well as its final case.  Read the Tribunal's announcement.

Read more
Posted by ObiterJ at Sunday, December 03, 2017 No comments:

Ratko Mladić, the former commander of the Bosnian Serb army, has been sentenced to life imprisonment after being convicted of genocide, war crimes and crimes against humanity by the International Criminal Tribunal for former Yugoslavia (ICTY) at The Hague.

The one-time fugitive from international justice faced 11 charges, two of genocide, five of crimes against humanity and four of violations of the laws or customs of war. He was cleared of one count of genocide, but found guilty of all other charges. The separate counts related to “ethnic cleansing” operations in Bosnia, sniping and shelling attacks on besieged civilians in Sarajevo, the massacre of Muslim men and boys at Srebrenica and taking UN personnel hostage in an attempt to deter Nato airstrikes.

Delivering the verdicts, Judge Alphons Orie said Mladić’s crimes “rank among the most heinous known to humankind and include genocide and extermination."

Read more
Posted by ObiterJ at Wednesday, November 22, 2017 No comments:

The International Court of Justice (ICJ) is the principal judicial organ of the United Nations - UN Charter Chapter XIV.  The court operates according to its Statute and Judges serve for 9 year terms and they may be re-elected by the United Nations.

Judge Christopher Greenwood was elected to the court in November 2008 and was willing to be re-elected.  However, it became clear that he was not securing sufficient support within the UN General Assembly and his candidacy was withdrawn - The Guardian 20th November  and  BBC 21st November - How UK lost ICJ place to India

Read more
Posted by ObiterJ at Tuesday, November 21, 2017 No comments:

Internment in World War 2 and later 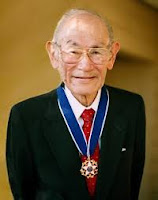 Over the years, democratic nations have introduced powers to detain those whose presence is considered to be inimical to public safety.  The use of such powers has, at times, been without adequate legal safeguards.  Considerable injustice and tragedy has arisen particularly when the powers have been directed at a whole section of the population such as those of Japanese descent living in the USA in the 1940s.

7th December 1941 was a "Date which will Live in infamy."  Those were the words of President Franklin D. Roosevelt in his famous speech to Congress following the attack by Japanese forces on the United States naval base at Pearl Harbour, Hawaii.   One consequence of this was that President Roosevelt issued Executive Order 9066 - dated 19th February 1942.   The Order authorised the Secretary for War to prescribe "Military Areas" in such places and of such extent as he or the appropriate Military Commander may determine, from which any or all persons may be excluded, and with respect to which, the right of any person to enter, remain in, or leave shall be subject to whatever restrictions the Secretary of War or the appropriate Military Commander may impose in his discretion."  This exercise of Presidential power was justified in the Executive Order on the basis that "the successful prosecution of the war requires every possible protection against espionage and against sabotage to national-defense material, national-defense premises, and national-defense utilities."  A further Executive Order was issued in 1942 creating a "War Relocation Authority.

Read more
Posted by ObiterJ at Monday, February 20, 2017 No comments:

ObiterJ
Life long interest in law about which there is much misinformation and misunderstanding. My blog seeks to look at topical items and their complexities and tries to explain things in a straightforward way. Obiter means "by the way" and my posts are "by the way." I hope that the posts are responsible, balanced and informative but it is for you, the reader, to make up your own mind. I do not seek to persuade you. At all times I will try to speak for fairness - Pro Aequitate Dicere.